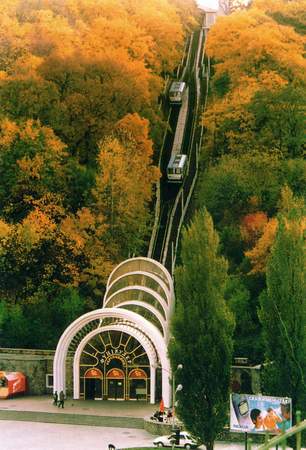 The Kyiv Funicular (Ukrainian: Kyivs’kyi funikuler) serves the city of Kyiv, connecting the historic Upper town, and the lower commercial neighborhood of Podil through the steep hill overseeing the Dnipro River.

The funicular was constructed during 1902-1905, and was first opened to the public on 7 May 1905. The construction cost, about 230,000 Russian rubles, was covered by a Belgian owner of the Kyiv trams. The funicular was the project of Arthur Abrahamson, who received professional training on railroad engineering in Zürich, Switzerland and Saint Petersburg, Russia. The station vestibules were designed by N. Piatnitskiy, and the railway structure was designed N. Barishnikov.

Due to its nearness to the St. Michael's Cathedral, it was once named the Mikhailivs’kyi Mechanichnyi Pidyom (literally St. Michael's Mechanical Lift). After the cathedral was destroyed by the Soviet authorities in 1935-1936, the name of the funicular was changed.

The funicular uses the two rail and passing-loop system. The two cars are designated with the Cyrillic letters Λ and П which stand for left and right. The funicular was renovated three times: in 1928, 1958, and 1984.

Wheel width: 100 cm. Total track length: 238 meters. The total gradient of the slope on which the funicular runs on is 36 %. The cable cars are powered by an electric motor which is located inside the upper station.

The travel time between the stations is approximately 3 minutes. The route is from the Mykhailivska Square in the Uptown to the Poshtova Square in the Podil. The ticket price is the much like the other city-owned public transportation methods. The funicular provides daily service to 10,000-15,000 passengers, and annually to 2.8 million passengers.

The funicular was closed on September 25, 2006 for restoration, which is usually conducted every year. The total cost of the restoration was expected to be 455,400 hryvnias (about 90,500 US dollars).

Mykhaylo Brodskyy, a Ukrainian politician, claims that when he was young, he participated in the construction of the funicular.