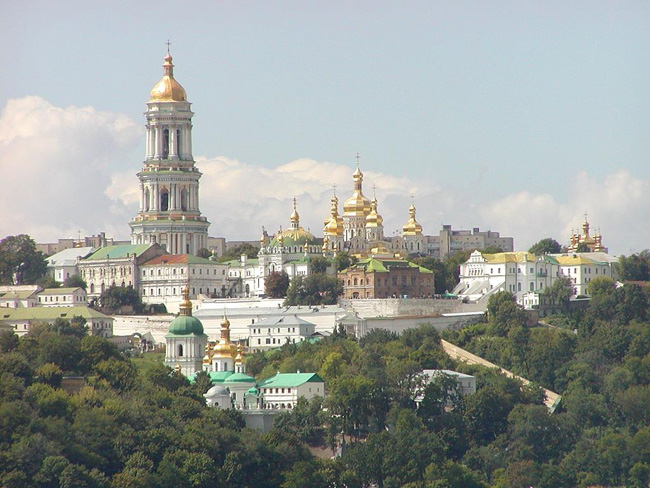 The KyivPechersk Lavra (Ukrainian: Kyievo-Pechers’ka lavra) also known as the Kyiv Monastery of the Caves, is a historic Orthodox Christian monastery in Kyiv, Ukraine. Since its foundation as the cave monastery in 1015 the Lavra has been a preeminent center of the Eastern Orthodox Christianity in Eastern Europe. Together with the Saint-Sophia Cathedral, it is inscribed as a UNESCO World Heritage Site. It was named one of the Seven Wonders of Ukraine on August 21, 2007, based on voting by experts and the internet community.

Currently, the jurisdiction over the site is divided between the state museum, the National Kyiv-Pechersk Historic-Cultural Preserve, and the Ukrainian Orthodox Church as the site of the chief monastery of that the Church and the residence of its leader, Metropolitan Volodymyr.

The etymology and other names

The word pechera means cave. The word lavra is used to describe high-ranking monasteries for (male) monks of the Eastern Orthodox Church. Therefore the name of the monastery is also translated as Kyiv Cave Monastery, Kyiv Caves Monastery or the Kyiv Monastery of the Caves

According to the Primary Chronicle, in the early 11th century, Antony, a Greek Orthodox monk from Esphigmenon monastery on Mount Athos, originally from Liubech of the Principality of Chernigiv, returned to Rus' and settled in Kyiv as a missionary of monastic tradition to Kyivan Rus'. He chose a cave at the Berestov Mount that overlooked the Dnipro River and a community of disciples soon grew. Prince Iziaslav I of Kyiv ceded the whole mount to the Antonite monks.

The buildings and structures

The Great Lavra Bell tower is one of the most notable features of the Kyiv skyline and among the main attractions of the Lavra. It was the tallest free-standing bell tower at the time of its construction in 1731-1745, and was designed by the architect Johann Gottfried Schädel. It is a Classical style construction and consists of tiers, surmounted by a gilded dome. Its total height is 96.5 meters.