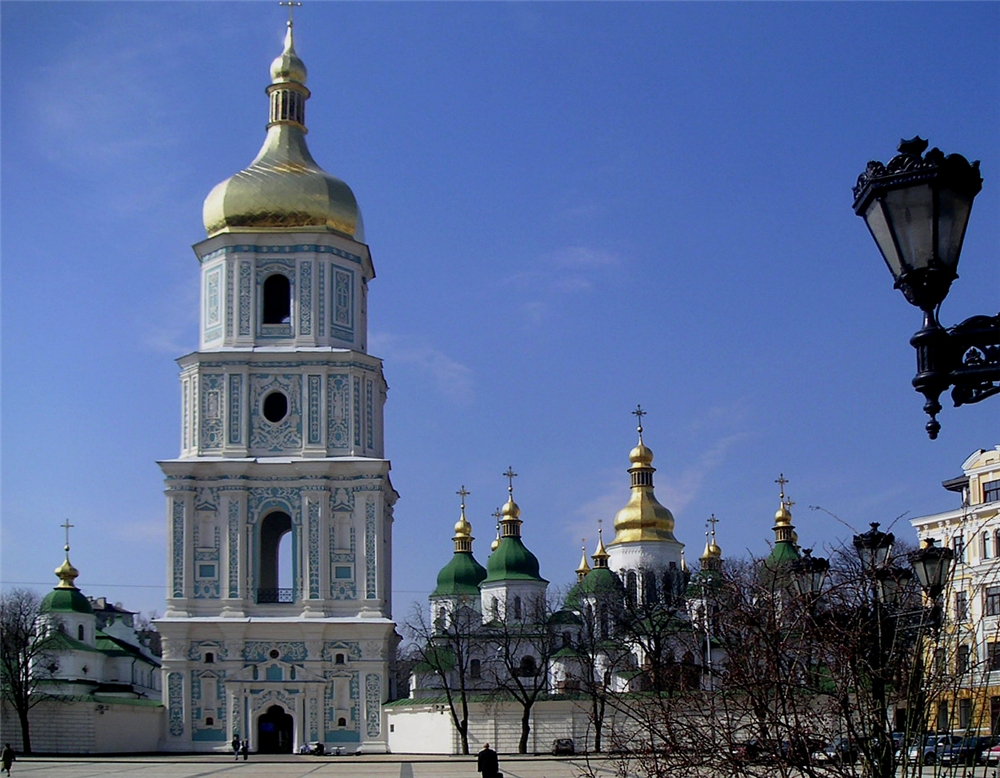 Saint Sophia Cathedralin Kyiv is an outstanding architectural monument of Kyivan Rus'. Today, it is one of the city's best known landmarks and the first Ukrainian patrimony to be inscribed on the World Heritage List.

The complex of the Cathedral is the main component the National Sanctuary "Sophia of Kyiv" the state institution responsible for the preservation of the Cathedral complex along with several other historic landmarks of the city.

The cathedral's name comes from the 6th-century Hagia Sophia cathedral in Constantinople (meaning Holy Wisdom, and dedicated to the Holy Wisdom of God rather than a specific saint named Sophia). According to a less popular theory, its model was the 13-domed oaken Saint Sophia Cathedral in Novgorod (ca. 989), which Yaroslav I the Wise determined to imitate in stone as a sign of gratitude to the citizens of Novgorod who had helped him secure the Kyivan throne in 1019.

The first foundations were laid in 1037, but the cathedral took two decades to complete. The structure has 5 naves, 5 apses, and (quite surprisingly for Byzantine architecture) 13 cupolas. It is surrounded by two-tier galleries from three sides. Measuring 37 to 55 m (121 to 180 ft), the exterior used to be faced with plinths. On the inside, it retains mosaics and frescos from the eleventh century, including a dilapidated representation of Yaroslav's family, and the Virgin Orans.

Originally the cathedral was a burial place of the Kyivan rulers including Vladimir Monomakh, Vsevolod Yaroslavich and of course the cathedral's founder Yaroslav I the Wise, although only the latter's grave survived to our days.

After the pillaging of Kyiv by Andriy Boholyubsky of Vladimir-Suzdal in 1169, followed by Mongolian Tatars in 1240, the cathedral fell into disrepair. Following 1595-96 Union of Brest, the cathedral of Saint Sophia belonged to the Ukrainian Greek Catholic Church until it was claimed by the Moldavian Orthodox metropolitan Peter Mogila (Mohyla) in 1633. Mogila commissioned the repair work and the upper part of the building was thoroughly rebuilt, modeled by the Italian architect Octaviano Mancini in the distinct Ukrainian Baroque style, while preserving the Byzantine interior, keeping its splendor intact. The work continued under the Cossack Hetman Ivan Mazepa, and in 1740 the Cathedral was completed to its present form.

After the Russian Revolution of 1917 and during the Soviet antireligious campaign of the 1920s, the government plan called for the cathedral's destruction and transformation of the grounds into a park "Heroes of Perekop" (after a Red Army victory in the Russian Civil War in Crimea). The cathedral was saved from destruction primarily with the effort of many scientists and historians. Nevertheless, in 1934, Soviet authorities confiscated the structure from the church, including the surrounding seventeenth–eighteenth century architectural complex and designated it as an architectural and historical museum.

Since the late 1980s Soviet, and later Ukrainian, politicians promised to return the building to the Orthodox Church. Due to various schisms and factions within the Church the return was postponed as all Orthodox and the Greek-Catholic Churches lay claim to it. Although all of the Orthodox churches have been allowed to conduct services at different dates, other times they are denied access. Most memorable was the funeral of Patriarch Volodymyr of the Ukrainian Orthodox Church - Kyiv Patriarchy, when riot police were forced to prevent the burial on the premises of the museum and a bloody clash took place. After events such as those no religious body has yet been given the rights for regular services. The complex now remains a museum of Ukraine's Christianity, with most of its visitors being tourists.

On 21 August 2007, the Saint Sophia Cathedral was named one of the Seven Wonders of Ukraine, based on a voting by experts and the internet community.