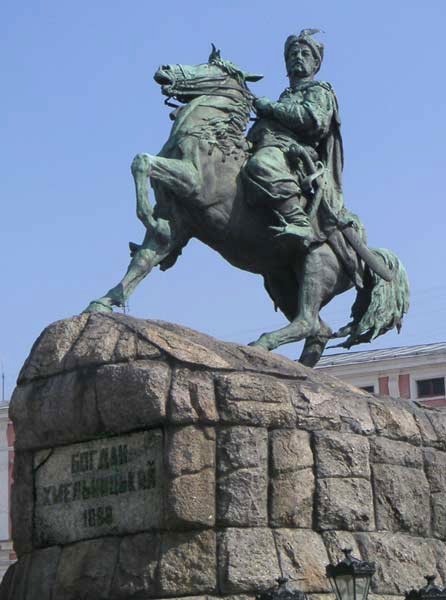 Description: The monument is dedicated to the Cossack leader Hetman Bohdan Khmelnytsky, who led the Ukrainian people during national liberation wars against Turks, Crimean Tatars, and the Polish nobility. To secure a military ally against Poland, Hetman Khmelnytsky signed an agreement with Muscovy in 1654, known as the Pereiasliv Agreement.

The authors of the monument are the sculptor M. Mikeshin and the architect V. Nikolaev. Besides the major sculpture, original project included dozens of smaller sculptures. But due to the luck of money they have never been made. The more, since pedestal also was not built at that time, the sculptures spent eight years "under arrest" in the yard of the Starokyivsky police department.

Finally the monument was "rescued". Architect Nikolaev suggested the best possible at that time solution. Pedestal was made of the leftover of the granite boulders which were used to build the Chain bridge in Kyiv. It came out lower than it was originally designed.

Although the monument looks somewhat disproportional, we already can't imagine something different on that place. The monument became one of the Kyiv's easily recognizable symbols as a part of the Sofiyska Square ensemble.