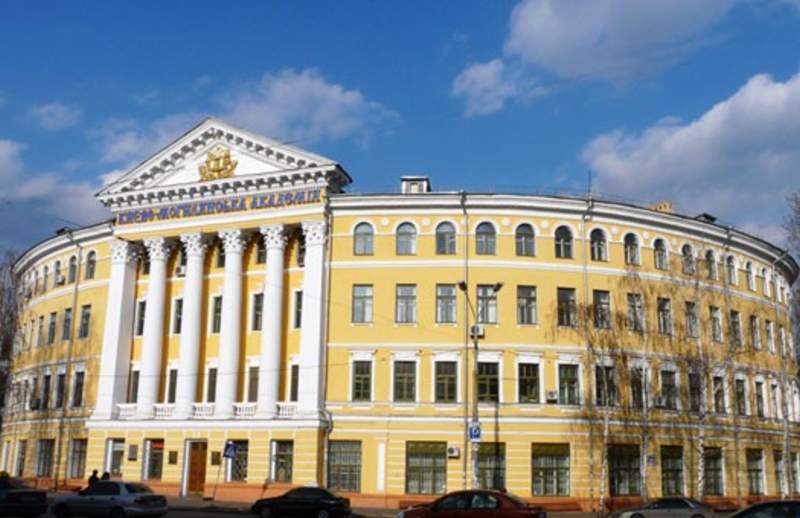 The ecclesiastiacal schools and educational colleges have been functioning in Ukraine since the end of 16th century. They were mostly founded by the foreigners-catholics: the Genoese, Dominicans and Jesuits. Of course, these teachers tried to spread the Roman-Catholicism and Polish laws. The Ukrainians were joined to the west culture by demolition of their national customs, languageand traditions that of course was not acceptable for the population.
Kiev has become the center of the national revival. Overhere, by the printing house of Kiev-Pechersk Monastery the community of Kiev brotherhood (eventually turned to the school) was established under guidence of archimandrite Elisey Pletenetskyi. On the 15th of Octoober 1615 the school moved to the seperate prenises in Podol. This day is considered to be a start of foundation of Kiev Bratskyi School, the predecessor of Kiev-Mohyla college and eventually Academia.

In 1632 the school was united with the school of Kiev-Pechersk Lavra, founded in 1631 by the archimandrite of Kiev-Pechers Lavra, a metropolitan of Kiev and Galichia Peter Mohyla. The new educational institution was named as the college of Kiev-Brotherhood.


The college during Peter Mohyla's time

The head of Kev-Brotherhood college, its guardian and protector was Peter Mohyla. He carried out some succesful reforms which trned the college to the instition based on western conceipt of education. The lessons were taught in Latin. The students were taught the Church Slavonic language, Russian, Greek, Polish and they were brought up in the orthodox faith. The native and world history, literature and poetry, philosophy were learned in the college together with singing, catechism, arithmetic, rhetoric and theology. The pupils practised their eloquence in disputes on Saturdays. The children of all social classes were admitted to the college. In the 17th century Kiev-Mohylansla Academia had 8 grades divided into the juniors (4 grades), secondary (2 grades) and senior (2 grades). The educational process lasted up to 12th years. The students were able to prolong their studies as the academia was a higher educational institution. The pupils had the right to study there as long as they wished with no age limit. They were never punished or suspended, their financial needs and phisical being was taken into account. There was an opportunity to study in the same class for 2 or 3 years. The heads of the college were: a rector, prefect and supervisor. The teachers for the college got their education in the universities of Europe and eventually they started to be educated in the college. Peter Mohyla provided the teachers and poor students with some financial means for their studies and being. During his time the new stone premises were built and it has been remained to nowdays on the territory of Kiev-Mohylanska academia and knwn as Refectory or Svyatoduhovskaya church. When Peter Mohyla was dying he bequeathed good money to the college and a library which had about 2131 books, outbuildings in Podol, hamlet Poznyakovskyi, villages Gnydyn, Protsyv and Rovno.


The obtaining of satus

The college got the name of Kiev-Mohylanskyi college in honour of Peter Mohyla. The only thing which was missed by Peter Mohyla was that: he failed to get the official status of the higer educational institute for the college. His students carried on that business. In 1658, hetman Ivan Vyhovskyi, former student, managed to sign so called Gadyachesky articles with Poland and according to them Ukraine together with Lithuania and Poland became a memeber of federal Rechy Pospolita. Ukraine obtained its rights including religious freedom and the higher status for the college was obtained as well. That treaty was ratified by Polish Seym in April, 1659. After having joined to Russia, under guidence of hetman Ivan Mazepa and metropoly Varlaam Yasynskyi, the monarch order was issued on the 26th September, 1701 that confirmed the status of academia for the college.

Kiev-Mohylanska academia has become the first orthodox higher educational institute in the west Europe. The number of sciences learnt was enlarged. Such languages as French (since 1753), German (1738) were taught. For better teaching of the christian sources, the lessons of Hebrew were organized. Natural history, geography, mathematics, architecture and painting lessons, eloquenc, home and village economics, medicine and Russian rhetoric. The number of teachers reached to more than 20 persons by the end of 18th century, there were more than 10,000 books in the academical library. The theology was taught by system of Pheophan Prokopovich since 1759, rhetoric lessons were given in accordance with Lomonosov's works, the rest of the subjects were taught by foreign guidence. in 1742, the number of students reached to 1,234 persons. The Academy had a unique library which had been hathered for two centuries. The books from russia, Belarus, Amsterdam, Gamburg, Gall, berlin, Bratyslav, Dantsyg, Warsaw and London were saved there. it is interesting to note that during Peter the First rule, the academy had difficult times. The Ukrainian language and teaching in it was prohibited. The lections in "peasant language" were abandoned by law and only Russian language was to be used.

The importance of Kiev Mogilayanska Academia

The Academy has been having much importance in the story of Russian enlightenment of 18th century. It became a center of science and revival for all the east Slavs. The Russians, Ukrainians, Belorussians, Moldovs, Serbs, Bolgarians, Greeks, Italians studied there. The culture activists from Serbia and Bolgaria applied to the Academy to send them the teachers. The students of Kiev-Mohylanska Academy became the teachers in Slavonic-Greek-Latin academy in Moscow, Alexandro-Nevskaya seminary in Sanct Petersburg and Academy in Kazan. 14 hetmans of Ukraine including Ivan Mazepa, Philip Orlik, Pavel Polubotok, Danil Apostol, Yurui Khmelnytskyi, Ivan Vygovskyi, Peter Doroshenko, Ivan Skoropadskyi and others. Recognized as saints the metropolitans Dmytryi Tupalo, Peter Konushkevich, Ivan Maksimovich. The great Russian scientist Mikhail Lomonosov studied in the Academy. The most famous activists of the academy are: Innokentyi gyzel, Iosaf Krokovskyi, Lazar baranovich, Gavryyl Dometskyi, Lavrentyi Zyzanyi and others.


The closing of Academy

After foundation of the Moscow University in 1755, the importance and popularity of the Kiev-Mohylanska Academy got less. The opening of the University in Kharkov in 1805 made the Academy lose the status of the higher educational institution. However, the efforts were made to turn it to the University and open some more additional faculties of law, medicine and maths. Inspite of all the attempts, it was impossible to get a permission of Ecatherine II. By order of the government and Synod issued on the 14th of August, 1817, the Academy was closed.

In 1819 the Ecclesiastical Academy of Kiev was opened again and then the Academy. In Soviet times, the navy college was situated in its territory.