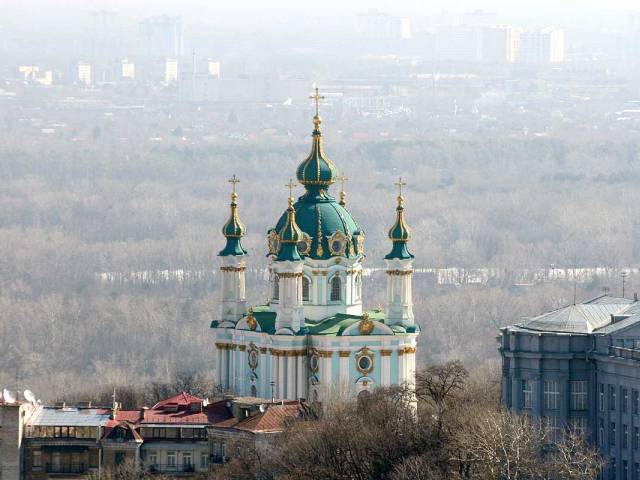 The Saint Andrew's Church or sometimes [incorrectly] the Cathedral of Saint Andrew is a major Baroque church located in Kyiv, the capital of Ukraine. The church was constructed in 1747–1754, to a design by the Imperial Russian architect Bartolomeo Rastrelli.

The Saint Andrew's Church overlooks the historic Podil neighborhood, situated on a steep hill to which the church gave its current name Andriivska Hill. It is currently one of four architectural landmarks of Ukraine, which were put down on the List of Mankind Treasures of Five Continents by the world society.

The location of the church is attributed to the place where the Apostle Saint Andrew arrived and erected a cross. According to the chronicle "The Tale of Bygone Years," Saint Andrew came to the Dnipro River's slopes and erected a cross in the first century A.D., where he prophesied the foundation of a great Christian city in what was then a sparsely inhabited area. His prediction later became true: the city of Kyiv arose and became the center of the Eastern Orthodox faith.

In 1086, the Grand Prince of Kyiv Vsevolod I constructed a small church, dedicated to the erection of the cross by Saint Andrew. In 1215, Prince Mystyslav of Halych built the Church of the Exaltation of the Cross nearby. However, the church did not survive after the Mongol invasion of Kyivan Rus' in 1240. From that point after, wooden churches were constructed in the place where the Church of the Exaltation of the Cross had been located, although, were too destroyed and again replaced with another one. In 1690, a wooden church consecrated to Saint Andrew was moved from the Brethren's cloister in Podil to Andriivska Hill. It too did not last long, only until 1725, when it was pulled down.