The Monument to Grand Princess Olga

The Monument to Grand Princess Olga 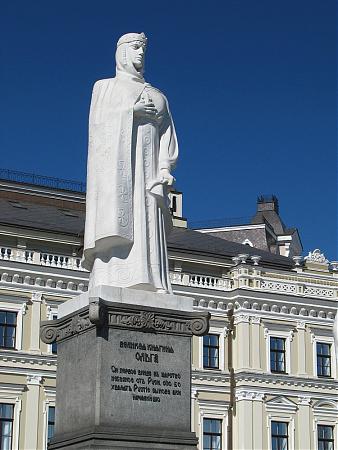 The greatly revered and later canonized Grand Princess Olga of Kyiv, the grandmother of Vladimir I, took over the Kyivan throne upon her husband's demise (in the X century). Her first action recorded in the chronicles was to avenge her husband's death. And she did it not once, but twice, and in a very creative fashion at that.

Now it must be said that Princess Olga's husband tried to collect taxes twice in one year. The Drevlians (a Slavic tribe on the territory controlled by Kyiv) have tied the Great Prince's legs to two saplings, and he was thrown into parts...

The Derevlians wanted for Olga come and marry their prince Mal. Olga made this reply, "Your proposal is pleasing to me; indeed my husband cannot rise again from the dead. But I desire to honor you tomorrow in the presence of my people. Olga pretended to show them great honor by having her men carry the Drevlians' boats from the Dnipro River towards the Prince's residence..." and straight into a huge pit. She then commanded that they should be buried there alive, and they were thus buried.

But that was not enough. Olga sent word to the Drevlanians to send over their best men to persuade the people of Kyiv to let her marry. Thinking that Olga was willing to marry, the Drevlanians sent a large number of men. When the Derevlians arrived, Olga commanded that a bath should be made ready, and invited them to appear before her after they had bathed. The bathhouse was then heated, and the Derevlians entered in to bathe. Olga's men closed up the bathhouse behind them, and she gave orders to set it on fire from the doors, so that the Derevlians were all burned to death.

Olga then sent to the Derevlians the following message, "I am now coming to you..." Olga prepared an army to attack Iskorosten (city of the Drevlians). When she arrived to the city she said "From each house give me three pigeons and three sparrows. I do not desire to impose a heavy tribute, like my husband, but I require only this small gift from you, for you are impoverished by the siege." The Derevlians sent them to Olga with their greetings. Olga then asked The Drevlians to return to their city, promising that on the morrow she would depart and return to her own city - Kyiv. BUT....

Now Olga gave to each soldier in her army a pigeon or a sparrow, and ordered them to attach by thread to each pigeon and sparrow a piece of sulfur bound with small pieces of cloth. When night fell, Olga bade her soldiers release the pigeons and the sparrows. So the birds flew to their nests, the pigeons to the cotes, and the sparrows under the eaves. The dove-cotes, the coops, the porches, and the haymows were set on fire. There was not a house that was not consumed, and it was impossible to extinguish the flames, because all the houses caught on fire at once. The people fled from the city, and Olga ordered her soldiers to catch them. Thus she took the city and burned it, and captured the elders of the city. Some of the other captives she killed, while some she gave to others as slaves to her followers. The remnant she left to pay tribute.

Olga went on to rule for a long time, first by herself, then as regent during the long absences of her son, with great ability and wisdom.

Around 957, Olga traveled to Constantinople and was baptized in the Christian faith, under the sponsorship of the Byzantine emperor. Her baptism did not lead to the conversion of her people, but established the Eastern Orthodox Church in Rus. She insisted that the Russian Church be granted autonomy; she did not want Rus to become a Byzantine vassal state.