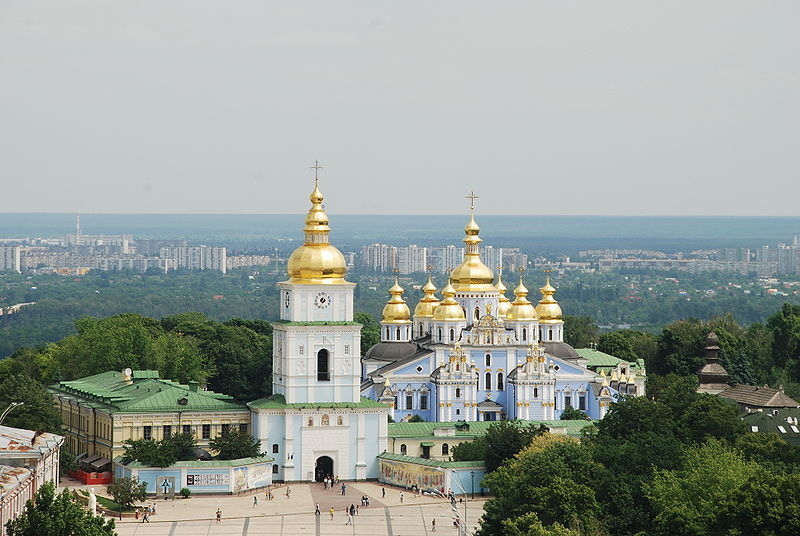 The church is not just a piece of architecture. It is a harmony of Heaven in its earthly reflection, it is the whole universe presented in a way comprehensible to man. It can also be regarded as an embodiment of man's primary form and function. In other words, any church is not just so many bricks or logs put together and arranged in a special manner but at least a sort of a milestone on the road from earth to Heaven.
Each Christian country has its own “main” church which sets the tone for spiritual life of the nation, and if it is an old church it has been doing so for centuries. Ukraine has three such churches, all of them to be found in Kyiv, its capital. They are the Holy Sophia, the Uspensky (Assumption) Cathedral of the Kyiv Pechersk Lavra Monastery and the Mykhaylivsky Zolotoverkhy (St Michael's) Cathedral of the Mykhaylivsky Monastery. For almost a millennium these three churches had been spiritual inspiration for the Ukrainian people until in the cataclysmic twentieth century two of them succumbed to the vandalism of the new totalitarian breed of barbarians. Only Sophia has survived almost intact.

The Uspensky Cathedral was dynamited and then blown up by an underground cell of the Bolshevik resistance fighters shortly after the Nazi Germans captured Kyiv in September of 1941. Its majestic ruins keep reminding us of the tragedy. The Mykhaylivsky Zolotoverkhy (further on it will be referred to as “St Michael's”) has been dealt the hardest blow - in the mid-thirties of this century the Bolshevik theomachists and atheist freaks pulled it down “in order to clear up space for new glorious buildings of the victorious socialism.” At that time, this gem of early Ukrainian ecclesiastic architecture had been in existence for more than 800 years. As late as ten years ago, only art historians, enthusiasts of Ukrainian history and a handful of Kyiv old timers knew that at the top of the Volodymyr Hill had once stood a majestic church.
The construction of St Michael's was begun in the year of Our Lord 1108 and soon its gold leaf-covered domes rose high above the Starokyivska Knyazha Hora (“Old Prince’s Mount” as the hill on which the church stood was called at that time). Prince Svyatopolk the Kyivan whose Christian name was also Mykhaylo (Michael), initiated the construction of St Michael's.

No wonder the new church (originally it had one nave, two aisles, and three apses) was dedicated to Archangel Michael who was regarded in old Orthodox tradition as the Leader of all the Heavenly Hosts, Mighty Warrior fighting against Satan. The name itself in old Hebrew means “Who is like God?” Tradition holds it that these words were uttered before “war in heaven: Michael and his angels fought against the dragon...called the devil, and Satan... was cast out into the earth and his angels were cast out with him” (Revelation, 12:7-9).
The hill on top of which St Michael's was built had, in fact, been a pagan shrine up to the year 988 when Christianity was adopted. There had been several idols there, decorated with gold and silver, which were cast after the baptism of the land into the Dnipro river. A monastery was founded a little later at the place of the former heathen shrine and named after Archangel Michael, the Invincible Great Captain.
The cult of St Michael came to Rus-Ukraine from Byzantium. As early as the 4th century there was a St Michael’s church in Constantinople. St Michael was considered to be the heavenly protector of the Byzantine Empire and heavenly patron of the Emperors and

their armies. Therefore, it was quite natural that St Michael was regarded in the Christian Kyivan Rus-Ukraine as the protector of the land. In the early 13th century there were already fifteen churches dedicated to St Michael built in the Kyivan Rus-Ukrainian lands, and the grandest of them all was Mykhaylivsky Zolotoverkhy in Kyiv.
The unusual destiny of St Michael’s was, probably, heralded by a mysterious bird which appeared in Kyiv in the year 1109. The Nykonivsky Chronicle of the 16th century says that “the bird was the size of a sheep, shone with many colors and sang songs sitting perched on the church (St Michael’s) for six days… and then flew away never to be seen again.” Those who saw the bird thought it was an angel or even Archangel Michael himself, encouraging the Kyivans by his presence to stand against the hordes of invading enemies.
Varvara, the wife of Prince Svyatopolk-Mykhaylo (daughter of Alexius I Comnenus, the Byzantine Emperor) promoted the prestige of St Michael’s. She brought to Kyiv the miracle-working relics of St Varvara who was martyred in the 3rd century AD to be kept in St Michael’s. These relics have remained the most precious sacred object of its kind in Kyiv throughout the ages (at present the relics are kept in St Volodymyr Cathedral). There were many miracles reported in connection with the relics of St Varvara placed in St Michael’s, but the miracles created by human hands in this church are no less wondrous.