The National Opera House of Ukraine

The National Opera House of Ukraine 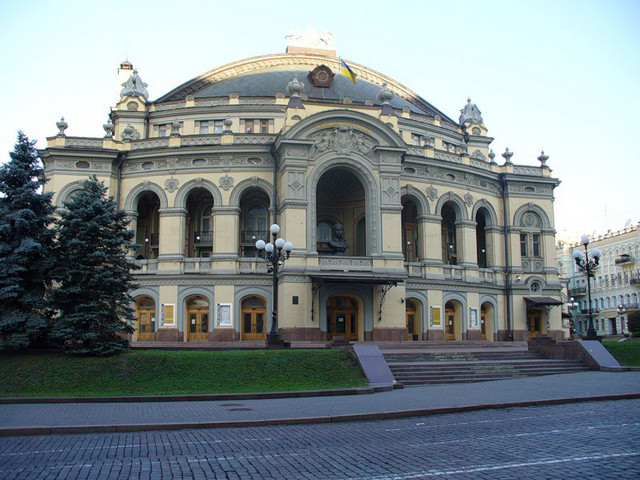 At the center of Kyiv, where two large metropolitan highways - Volodymyrska street and Bohdan Khmelnytsky street are crossed, just in the middle between golden-domed St Sophia Cathedral and the classical structure of the National University named after Taras Shevchenko, there is a building, which was poetically named as a temple of muses, an architectural pearl of Kyiv. It is the National Opera of Ukraine named after Taras Shevchenko.

The appearance of this perfect structure was preceded with a sad event: in February 1896, after the morning performance of opera Eugene Onegin by P.Chaikovsky, one of the making-up rooms caught fire. The fire spread instantly, and within some hours the stately structure of the City theatre constructed 1856 under the architect I.Shtrom‘s project, was burned to the charred walls. However surprising it is, but then it was not an exclusive case. Only for two years (1889 - 1891) in Europe and America 22 theatrical premises had burned down.

Kyivers sincerely grieved for their though old, but so customary theatre. It was on its stage that M.Yermolova, A.Lensky, M.Savina, C.Yablochkina, G.Fedotova, P.Strepetova performed. Here the spunky voice of A.Allridge, a great Negro tragic and sincere friend of Taras Shevchenko, sounded. It was here that the most famous actresses of the 19th century E.Duse and S.Bernhardt demonstrated their art.
It was also on this stage that the biography of the first in Russia, outside Moscow and St.Petersburg, permanently working opera theatre began. Here public had an opportunity to enjoy Ukrainian troupes‘playing with participation of. M.Kropyvnytsky, M.Sadovsky, M.Zankovetska...
And the opera theatre was no more. A public, creative intellectuals requested from "the parents of the city" to solve the problem on building in Kyiv, one of the largest industrial and cultural centers of then Russian Empire, a new premise of the opera theatre.
After rough disputes, City Council (City Duma) had accepted the decision to hold the international competition on the project of the Kyiv Opera. More than twenty architects from Ukraine, Russia, Germany, France, and Italy took part in it. On February 25, 1897 the jury announced the results of the competition. It was the project of the Russian architect Viktor Shreter that was recognized as the best.
Soon its engineering specifications - 280 drawings were brought to Kyiv, under which the refined Neo-Renaissance structure should be born. Building on a place of the old theatre started in 1898. On the construction more than 300 men worked simultaneously.
Unfortunately, the architect had not lived several months to see that day, when there was a solemn consecration of the new premises of the Kyiv Opera. At that time, the Kyiv City Opera Theatre really amazed everyone: its parterre, amphitheater, dress circle and four circles could accommodate 1,650 spectators (in parterre, 384 places). In the interiors, velvet and bronze dominated. The refined armchairs, luster and lamps had been brought from Vienna. The total cubic capacity of the theatre was almost 100,000 cub.m, the area of the premises - 40,210 sq.m.
Above the front entrance of the theatre, the official arms of Kyiv with the image of Archangel Michael, the patron of the city stood out in splendor. It was Kyiv‘s Metropolitan Phiognost, who had recognized it as blasphemy and categorically risen in opposition to the proposal of placing the image of the sacred heavenly soldier above such a sinful institution. Then the arms were replaced with the allegorical composition: heraldic griffins holding a lyre in their pads, as a symbol of musical art.

The facade of the building was decorated with busts of the composers M.Glinka and A.Serov, which the actors of the Petersburg‘s Mariinsky Theatre had presented to Kyiv. In 1934, during a restoration of the building the busts were taken off.
For the architect, it was important not only the appearance of the theatre, the rhythmic and refined decor of the facade. V.Shreter also took care of the premises to be convenient both for actors on the stage and for spectators in the auditorium. At that time, the Kyiv Opera‘s stage was the largest in Russia (width 34.3 m; depth 17.2 m; height 22.7 m). The theatre had the systems of steam heating, air conditioning, and the perfect scenic equipment.
The building harmoniously entered in the environment too. The architect had taken into account that the place, chosen for the theatre, was located in the historical part of Kyiv, and had taken care of the Neo-Renaissance building to be acceptable to the eye in this architectural-natural landscape. And he had wonderfully succeeded in doing this.
In 1930, however, the project of socialist reorganization of Kyiv Opera‘s premises was discussed so that to give it some architectural features of the new "proletarian style". Fortunately for the future generations, these plans were not carried out.
For more than eight decades there existed the V.Shreter‘s architectural masterpiece without changes, reconstruction and overhaul (besides extensions of 1936 to the back party of the building - a two-stored premise of rehearsal halls). For the long time of the exploitation, the constructions became threadbare, the scenic equipment and mechanisms became physically and morally obsolete, the external and internal decor lost much, and the gilding of interiors grew dull. In addition, erected on a place former ravine, the premise began gradually to sink and give cracks.
During 1983 - 1988, the capital reconstruction of the theatrical premises was being carried out. The building, which had experienced the burden of the time and events of the Second World War (artillery bombardments, the direct hit of an air bomb), required the large work, which proceeded almost five years. In 1988, the Kiev Opera opened its 120 season in the updated premises, which have appeared in all its beauty.
The restorers not only had preserved the wonderful external decor of the theatre and auditorium, but also significantly enriched it. After transferring the wooden wardrobes to the ground floor, the foyer appearance became more nice and spacious.
Now the theatre foyer fascinates with its solemnity, refinement, and shines with the fires of the lamps and luster, which reflect in the magnificent Venetian mirrors.
The marble steps of ladders, covered with unique porcelain lamps, conduct to dress circle and circles. Everywhere there are bronze, gilding, and light of the crystal lusters.
Taking into account the requirements of the time, the restorers have brought significant changes in the backstage part of the theatre premise. It has allowed increasing the rehearsal halls and make-up-rooms number; also, the special choral class was equipped. The parameters of a stage changed too. Its depth increased from 17 up to 20 m, and height from 23 up to 27 m, allowing to carry out a scenery change not only within an entr‘acte between actions, but also during a performance. The total area of the stage now is 824 sq. m. It was equipped with the newest at that time mechanisms, electronics, and illumination.
During the restoration, instead of an old organ, there was established the new one, made to order of the theatre by the Czech firm "Rieger-Kloss". The orchestra pit was reequipped too, and now 100 musicians can be placed there simultaneously.
In total, after the restoration, the area of theatrical premises has increased for 20,000 sq. m. The number of the make-up rooms has doubled some new rehearsal halls have appeared.