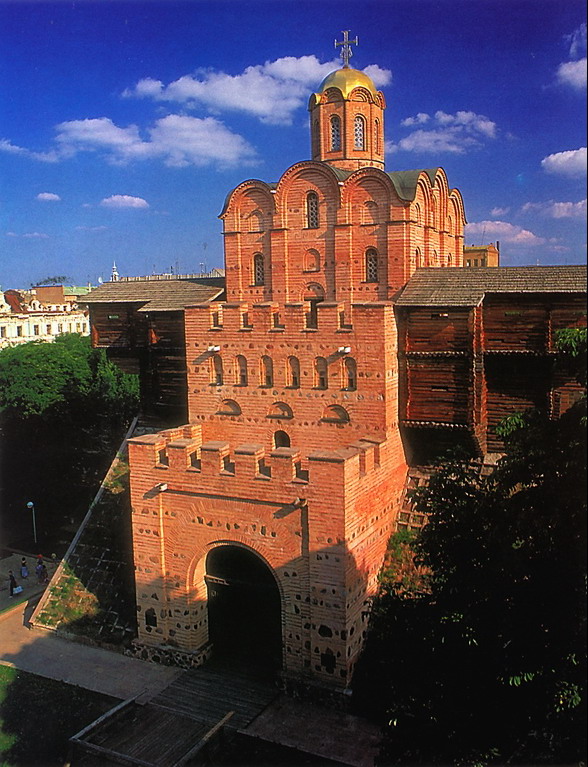 The Golden Gate of Kyiv (Ukrainian: Zoloti vorota, literally 'golden gate') is a historic gateway in the ancient city walls of Kyiv, the capital of Ukraine. The name Zoloti Vorota is also used for a nearby theatre and a station of the Kyiv Metro.

This gateway was one of three constructed by Yaroslav the Wise, Prince of Kyiv, in the mid-eleventh century. It was reputedly modeled on the Golden Gate of Constantinople, from which it took its name. In 1240 it was partially destroyed by Batu Khan's Golden Horde. It remained as a gate to the city (often used for ceremonies) through the eighteenth century, although it gradually fell into ruins.

In 1832 the ruins were excavated and an initial survey for their conservation was undertaken. Further works in the 1970s added an adjacent pavilion, housing a museum of the gate. In the museum one can learn about the history of construction of the Golden gate as well as ancient Kyiv.

In 1982, the gate was completely reconstructed for the 1500th anniversary of Kyiv, although there is no solid evidence as to what the original gates looked like. Some art historians called for this reconstruction to be demolished and for the ruins of the original gate to be exposed to public view.

In 1989 with the expansion of the Kyiv Metro, a station Zoloti Vorota was opened nearby to serve the landmark. What makes it unique is that its architectural ensemble is very much based on the internal decorations of ancient Ruthenia churches.